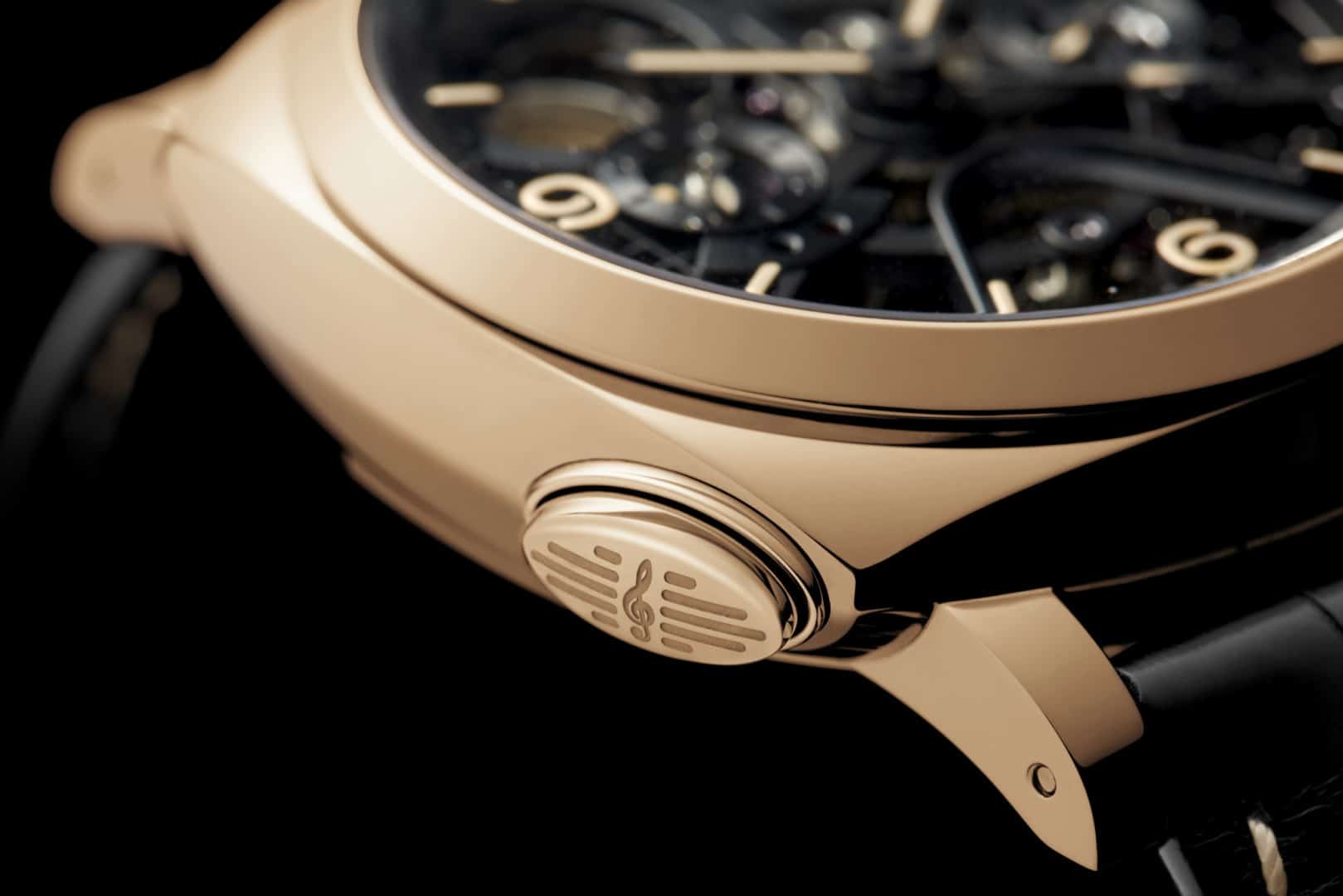 WITH THE EXCLUSIVE TOURBILLON REGULATOR AND THE REMARKABLE DOUBLE MINUTE REPEATER MECHANISM CHIMING EITHER LOCAL TIME OR A SECOND TIME ZONE, THE NEW RADIOMIR 1940 MINUTE REPEATER CARILLON TOURBILLON GMT IS TECHNICALLY THE MOST COMPLICATED WATCH EVER MADE BY THE PANERAI MANUFACTURE IN NEUCHÂTEL.

In all cultures there are ancient customs where the passing of time is marked by the sounds of bells or other instruments, and the complication embodying the heritage of these fascinating traditions in haute horlogerie is the hour and minute repeater mechanism, which causes the watch to chime by simply pressing on a push-piece.

For the creation of the new Radiomir 1940 Minute Repeater Carillon Tourbillon GMT, Officine Panerai has sought inspiration from its own history – for over a century indissolubly linked to the world of the sea – and from the marine tradition of marking the passage of time by a ship’s bell. On sailing ships in particular, the striking of a bell played an essential part in life on board: it served to rouse the crew in the morning, to summon the sailors for meals and to indicate the end of each watch. But it was also used to warn of danger, to convene an assembly or to indicate the presence of the ship to others when visibility was restricted by fog. This ancient tradition is invoked again today by the special tones of the chimes of this exceptional new Special Edition created by the Panerai Haute Horlogerie Manufacture in Neuchâtel. 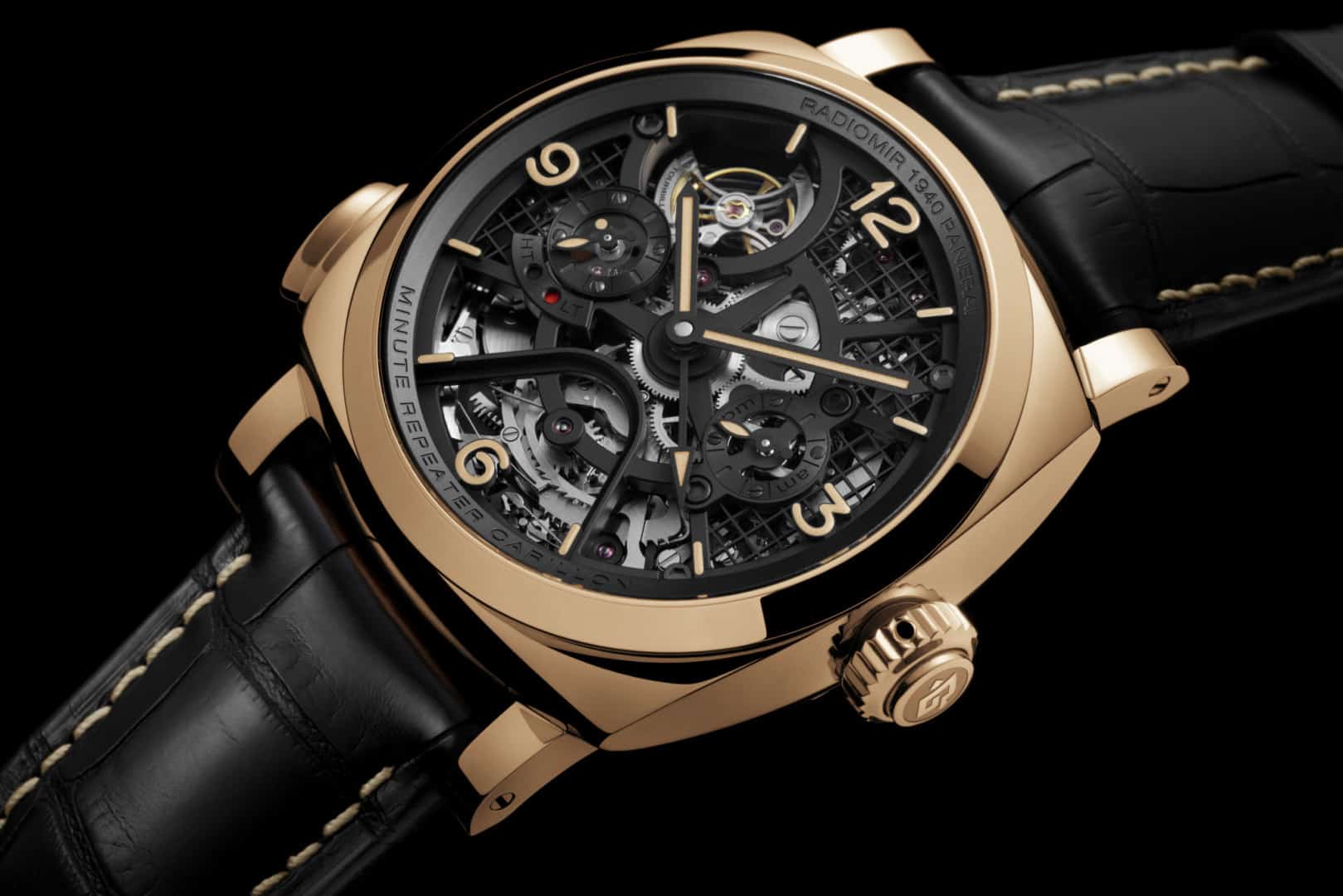 THE CARILLON: THREE DIFFERENT SOUNDS FOR INDICATING THE TIME THROUGH THE MELODY

For the Radiomir 1940 Minute Repeater Carillon Tourbillon GMT Officine Panerai has developed the new P.2005/MR Manufacture movement, a hand-wound skeleton calibre fitted with a high-end minute repeater mechanism with distinctive technical characteristics, faithful to the philosophy of the brand of innovating by pursuing constructional simplicity which result in practical benefits and ease of operation.

The chiming is activated by a push-piece at 8 o’clock, and it is carried out by three hammers which strike an equal number of gongs fixed to the movement and the case. The choice of three hammers, instead of the traditional two, enables three different sounds to be combined, so that the carillon can play a melody, like that of a bell. As is traditional, the first gong is the lowest and identifies the hour, while the last and highest indicates individual minutes. The unusual feature is that the second gong sounds triple chimes of an intermediate note, each triple chime corresponding to ten minutes instead of the traditional fifteen.

An example will help to describe the operation: in an ordinary repeater, the time of 10.28 is usually indicated by ten chimes for the hour, a different chime for the quarter of an hour and thirteen individual chimes for the minutes. In Officine Panerai’s Minute Repeater Carillon, however, the sequence consists of ten chimes for the hour, then two triple chimes (the two ten-minute intervals) and eight single chimes. The system of tens, reducing the number of chimes, makes telling the time easier and quicker, and it also corresponds to customary way in which time is now indicated by digital watches.

The quality of the sound propagated by the minute repeater is also enhanced by the specificities of the red gold of which the case is made and by its structure, being formed of two parts created separately and then soldered together. This construction enables the empty spaces inside the case to be optimised in order to enhance the quality of the sound. The hand work by master watchmakers gives the sound of each watch a unique character, similar yet imperceptibly different from each other. 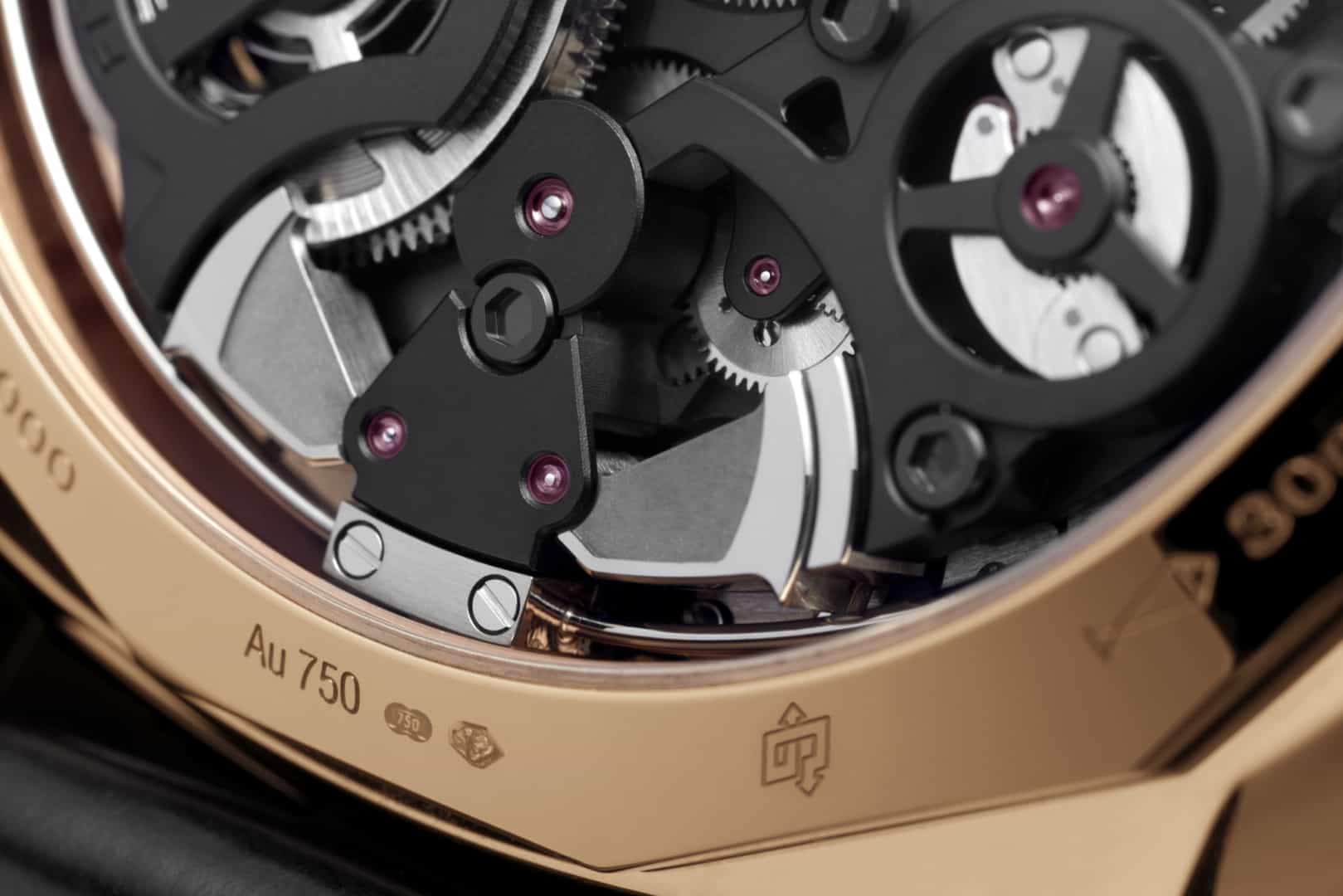 The most remarkable feature of Officine Panerai’s Minute Repeater Carillon is the fact that the repeater function can be activated both for local time and for a second time zone, which is indicated on the dial by the central arrow hand and the am/pm indicator on the counter at 3 o’clock. In this case too, the simplicity of selection and of activating what is, in essence, a double hour and minute repeater mechanism, is astonishing and the device is designed not to affect the safety of the movement.

To avoid accidental activation, the carillon can be operated by the push-piece at 8 o’clock only when the winding crown is rotated slightly. The degree of rotation required is shown by a black indicator placed on the side of the crown: when the indicator can be seen from the front, the carillon cannot be sounded but, by a single pressure on the push-piece on the crown, the local time or the second time zone can be selected, and the red HT/LT (Home Time/ Local Time) indicator at 8 o’clock marks which of the two alternatives is in force.

As well as the minute repeater mechanism, the handwound P.2005/MR calibre, the result of four years of research and development by the Laboratorio di Idee in the Neuchâtel manufacture, also has the remarkable Panerai tourbillon regulator, which can be admired from both the front and the back of the watch thanks to the sophisticated work of skeletonisation. In the system patented by Officine Panerai, the rotation of the tourbillon is different from that of the classic tourbillon. In the traditional version the balance cage rotates continuously on itself, cancelling out any variations caused by gravity and possible shocks. In the innovative Panerai mechanism, the tourbillon cage rotates on an axis which is perpendicular, not parallel, to that of the balance. Also, while the rotation is once a minute in a traditional tourbillon, in the P.2005/MR it takes 30 seconds, and this is shown by an indicator which rotates in the small seconds counter at 9 o’clock. The greater speed and the particular arrangement of the mechanism enable it to compensate for any changes of rate very effectively, ensuring a very accurate precision timepiece.

The sophisticated work of skeletonising is helpful in providing better acoustic performance and it also enables the sophisticated technology of the P.2005/MR calibre and its fascinating details to be admired. All the elements which form the dial are directly mounted on the movement or on the flange, on which the words ‘RADIOMIR 1940 PANERAI’ and ‘MINUTE REPEATER CARILLON’ are engraved. The little hammers of the minute repeaters and the two spring barrels, which store a power reserve of at least four days, are visible from the open back, through which the power reserve indicator mounted on the movement can also be read.

From the aesthetic point of view, the codes of the new Radiomir 1940 Minute Repeater Carillon Tourbillon GMT are the immediately recognisable ones of the Panerai style, such as the historic Radiomir 1940 case (49 mm in diameter) and the characteristic bar markers and figures covered with Super-LumiNova®. The case is presented in 18 carat red gold, a metal of intense colour and excellent properties both in terms of resistance to corrosion – thanks to a percentage of platinum in the composition of the alloy – and in propagating the sound, with its particular hardness.

For this watch, realised as a Special Edition and only made to order for clients, Officine Panerai has anticipated the possibility of personalisation, which includes not only the choice of strap, of the hands or of other special features, but also the possibility of making the case in a material other than red gold.

Another essential element of a Panerai watch, even for an exceptionally complicated model such as the Radiomir 1940 Minute Repeater Carillon Tourbillon GMT (PAM00600), is water- resistance, in this case guaranteed to 3 bar (equivalent to a depth of about 30 metres).