The Swiss watch Manufacturer Frederique Constant has won the Bucherer Watch Award 2015 for its Horological Smartwatch. This competition is organized by the Maison Bucherer in its Parisian boutique, which is the largest store in the world dedicated to exceptional timepieces. The prize is awarded for the most representative piece of this year’s watchmaking know-how and excellence.

Awarded by the Professional and acclaimed by the broad public

Amateurs and watch enthusiasts had three weeks to vote for the most innovative, technical and elegant timepiece, amongst a selection of 32 watches, chosen by a jury of professionals from the watchmaking industry and collectors alike.

Honoree of the 2015 edition

As the Swiss manufacture Frederique Constant launched its Horological smartwatch, it paved the way to the Swiss connected watchmaking industry. This watch embodies the true symbiosis between classicism and technological innovation, dressed in the finest aesthetics of the Horological tradition, but concealing a layer of smart functions. 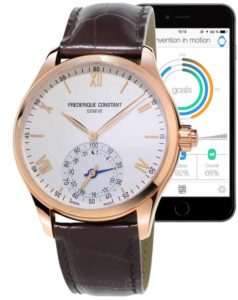 By combining technology and our watchmaking tradition, the Frederique Constant Horological Smartwatch takes luxury and simplicity to a new level. Offering hours, minutes and date, the “smart” aspect of this watch comes from its ability to accurately track your activity and sleep patterns. The smaller dial at 6 o’clock on the watch dial shows the percentage of your activity or sleep against your goal in real-time. This data is also displayed in the attractive MotionX-365® app, available for iOS and Android, with simple and easy to understand graphics to highlight how much one has moved and slept during the day, week, or month. The MotionX® high-accuracy end-to-end solution that includes firmware, applications and cloud infrastructure includes over 110 patents and encapsulates 7 years of research and development of a leading Silicon Valley technology leader.

You can discover the Horological Smartwatch at the Bucherer Boutique, on the store’s first floor, from the 2nd to the 31st of December.