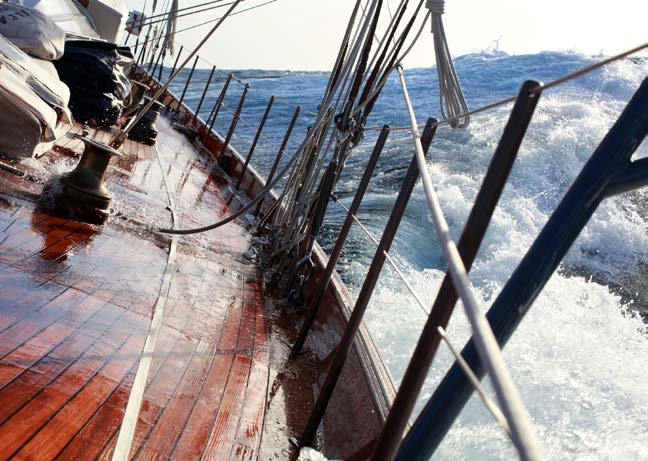 THE INTERNATIONAL TRANSATLANTIC RACE FOR CLASSIC AND VINTAGE YACHTS GETS UNDERWAY ON JANUARY 7TH 2015. AN OLD-FASHIONED ADVENTURE SPONSORED FOR THE SECOND CONSECUTIVE OCCASION BY OFFICINE PANERAI.

The epic classic and vintage yacht regatta par excellence makes a welcome return in the New Year. On January 7th 2015, a marvellous fleet of grandes dames of the sea casts off from the island of Lanzarote on a race of over 2,800 nautical miles across the Atlantic Ocean to Fort-de-France in Martinique, the port of arrival for the Panerai Transat Classique 2015.

Three years on from the victory of Bermudan ketch White Dolphin at the finish-line on the island of Barbados in the 2012 edition, the new fleet is preparing for a challenge that encompasses not just the courage, passion and heroism but also the timeless elegance that makes every classic boat unique. Once again for the 2015 edition, the honour of victory aside, the owner of the winning yacht will be presented with an exclusive watch from the Officine Panerai collections.

“Racing generates the adrenalin that only those who push themselves to the limit can ever know. And when you combine the discipline of sailing with the cohesion of a crew working in harmony for a common aim, the ocean becomes the most marvellous of playgrounds,” declared Olivier Pécoux, president of the Atlantic Yacht Club, which has organized the 2012 and 2015 edition with the technical and organisational assistance of the Comet Organisation.

Begun in 2012, the Atlantic Yacht Club’s partnership with Officine Panerai is a natural extension of the Florentine luxury sports watch-maker’s commitment to classic sailing. Officine Panerai is already the undisputed leader in that area thanks to its sponsorship of the Panerai Classic Yachts Challenge, the top international circuit for such craft. “Elegance, history, artisanal craftsmanship, uniqueness. The allure of vintage sailing is the product of age-old values which it shares with luxury sports watch-making. The Panerai Transat Classique 2015 is an event that not only expresses those same values but also encompasses a great passion for the sea, a sense of challenge and the audacity of confronting the ocean”, declared Officine Panerai CEO Angelo Bonati.

The transatlantic fleet will include yachts of different sizes from various eras in the history of sailing. The oldest member is the extraordinary gaff schooner, Adventuress, built in 1924 by legendary Scottish naval designer William Fife III. At 31 metres in length, she is second in size only to the other Fife schooner racing, the 40-metre-plus Altair built in 1931. The iconic New York naval designer Olin Stephens will also be present in spirit at least, thanks to the 1971 yawl Amazon and the 1975 sloop Gweneven. In the fleet too is a regular from the Panerai racing circuit: The Blue Peter, a wonderfully elegant 1930 Marconi cutter.

Classic sailing enthusiasts can follow the race minute-by minute on the paneraitransatclassique.com website which will be constantly updated and feature detailed information on the event itself, the participants, and the start and arrival ports. The boats should all have made landfall at Martinique by the end of January 2015.