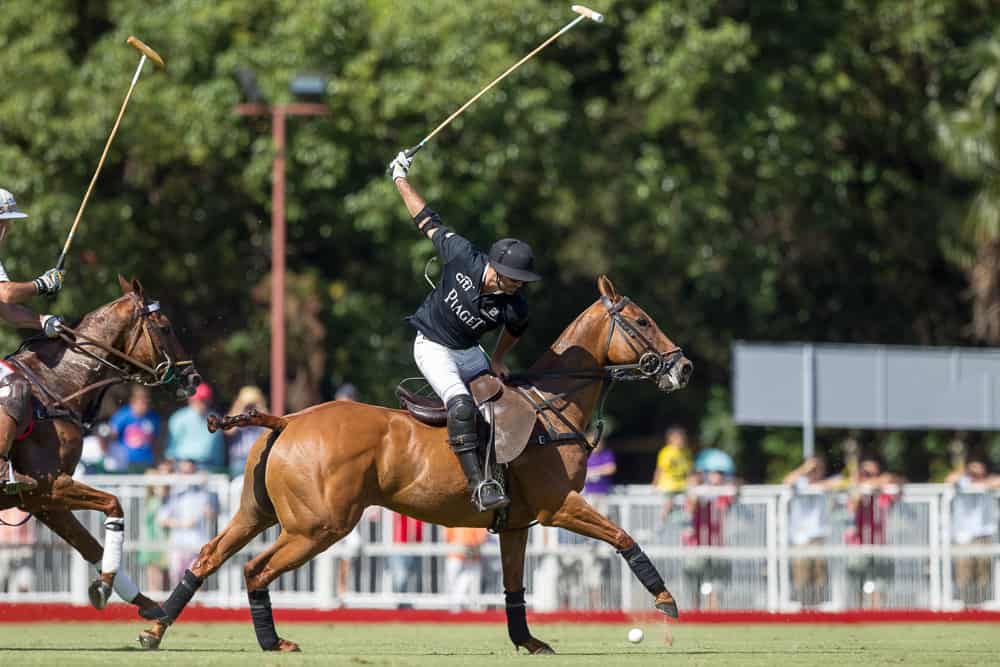 This past Sunday, both teams played a great match on field 2 at Palermo. Chapaleufu, (which consisted of four Heguys – brothers Pepe, Eduardo and Nachi, plus their cousin Bautista; who had not played together at Palermo since 1999), displayed a great team performance and made things quite difficult for the black jerseys. Despite their lethal attack, commanded by Facundo Pieres; the General Rodriguez based foursome were leading by only three goals at half time (9-6).

Ellerstina Piaget extended their advantage in the fifth chukker (11-7). During that fifth chukker, Mariano Aguerre’s mare ‘Machitas Vitina’ broke her leg and suffered a heart attack while trying to get up. Mariano continued playing with ‘Machitos Luisa’.

In the sixth chukker, Ellerstina Piaget tightened their attack and scored three more goals to a 13-8 lead. Chapaleufu came in strongly in the seventh chukker, and the Heguys cut the Ellerstina lead to three goals again (11-14), with only one chukker to go.

However, that last chukker would present some more trouble for Ellerstina: following the loss of his mare, Mariano Aguerre was taken off the field by an ambulance after suffering a shoulder injury, and had to be replaced by South African 8-goaler Nachi du Plessis.

At the end, Ellerstina Piaget ended with a tougher than expected 16-12 win.

Facundo Pieres: Open Kodama is a mare we share with Alex Garrahan and Diego Miguens. She is the daughter of Ilusión and Sportivo. I think it’s great that the Polo Pony Breeders Association are able to present these awards in every match, it’s a very good idea and recognition to the breeders.

This is Open Kodama’s first award; this is her first season. We’re doing very well with our horse string, and we’re going to bring our best for the next two matches.